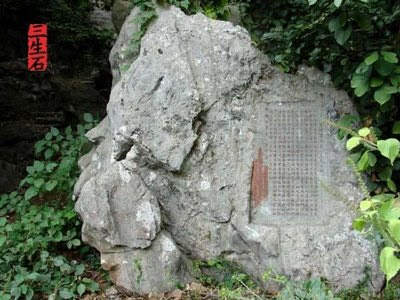 The Buddhist believe metempsychosis, or the migration of the souls of animated beings, people's relationships are predestined through three states of life: the past, present, and future life.

Legend has it that there's a road called Yellow Spring Road, which leads to Fogotten River. Over the river there's a bridge called Helpless Bridge (Naihe Bridge), at one end of the bridge sits a crimson stone called Three-life Stone. When two people die, they take this route to reincarnation. if they carve their name on the Three-life Stone together while they pass the stone, they are to be predestined to be together in their future life. Although before their rebirth they will be given a MengPo Soup to drink and thereby their memory of past life are obliterated.
In reality, San-Sheng Shi (三生石), or Three-Life Stone is located beside Flying Mountain near the West Lake, Hangzhou. On the stone, there is seal with three Chinese characters that say "The Three-life Stone," and a description "The remarks of Monk Yuanze's three-life stone in the Tang Dynasty" on the stone, telling the origin of the story.
Here is the story:
Li Yuan was born into a distinguished family. He spent all his time sightseeing, attending banquets, partying, and drinking. But he gave up his life of luxury and donated all his possessions to a temple. He himself moved into the temple and lived an desolated life only on one bowl of food, one drink a day, and without a servant.

Li became best friend of the Buddist Mont Yuanze, and lived together for nearly thirty years.

One day they took a trip to Ermei Mountains, Shechuan. When they passed the Three Gorges, they saw several women in bright clothes fetching water from the river. Yuanguan broke into tears and said, "One of these woman named Wang has been pregnant for three years and couldn't give birth, because I'm going to reincarnate as her baby in my next life, and I'm still alive. Today I've seen her; thus I know the end of my life is near. Please visit Wang's family three days after the baby's birth. If the baby smiles at you, he acknowledges you. Twelve years later we'll meet on the Moon Festival night, at Tianzhu Temple in Hangzhou." He died after saying this.

After three days, Li Yuan visited the newborn baby as he was told. The baby was wrapped in a blanket and seemed to know him. The baby smiled at him.

Twelve years later, at the night of the Moon Festival, Li traveled to Hangzhou for his appointment with Yuanguan. All of a sudden, he heard a shepherd boy sat on the back of an ox and tapped its horns, singing. Li Yuan greeted the boy and said, "How are you, Yuanzhe?" The boy said: "You kept your word very well. Now, you go your way and I go mine. We should not be near each other. Your predestined life is not over yet. I hope that you can be a diligent cultivator. If you cultivate diligently and are not dissuaded, we'll meet again some day." (Puresight)