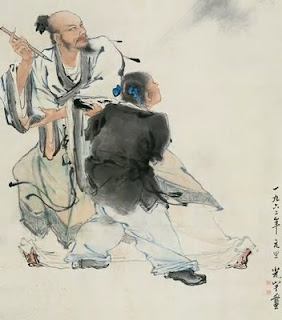 Once a famous artist Zhang Seng You drew four dragons on the walls of An Le Temple, Jin Ling, but he left the pupils of the dragons unfinished.
Someone asked him the reason of the omission. In answer, he said that if he put the pupils therein the dragons would become alive and fly away. The questioner did not believe it and requested him to complete the work. The artist nodded assent.
But as soon as the two dots were drawn, all of a sudden, there were thunder and lightning and the dragon became alive and instantly flew away, while the other three without pupils still remained there.
Based on this fairy tale, the last touch added to a drawing is said to be the act of adding pupils to a dragon, that is to say, the last touch in a masterpiece is the most important part of a drawing, or any other important business.