A bird startled by the mere twang of a bow-string 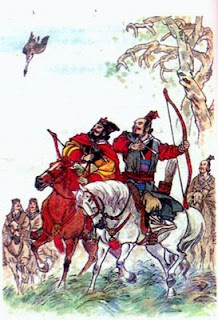 During the time of the Warring States (475-221 BC), there lived a well-known archer named Geng Ying whose art in shooting was excelled by none at his time.One day, as he was standing by the side of the King of Wei, a flock of swan were flying over. With confidence, Geng Ying said to the king, "The twang of my bow-string might bring down a bird." The King doubted much.

Just then a solitary swan goose appeared, low and slow in its flight, sad and dolorous in its cry. Instantly Geng Ying bended his bow and forcibly pulled the bowstring. Twang! High up went the shrilling sound into the air and down fell the bird to the ground.

The king admired with bewilderment. Gang Ying then explained: "The bird was flying low and slowly, because it was already hurt; it was crying in a bitter tone, because it had lost its companions. Due to the fact that it was already hurt and sad at heart, the twang of my strong bow, that birds dreaded most, startled it. The shrilling sound made its heart beat fast, its wings weak, its balance uneven. Thus it fell down just as commonly as a man drops his chop-sticks, at the thunder-stroke, at a dinner table."

Henceforth comes the idiom "A bird startled by the mere twang of a bow-string", illustrating a case where a man who had been previously and repeatedly frightened became numb and stupefied by a new thing of the same nature not knowing how to face the new situation.