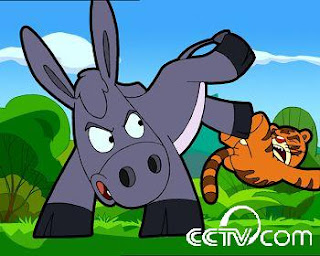 Once upon a time, Qian (now Guizhou province, China) had no donkeys. One day, a man full of fancy ideas shipped a donkey to the region. But he soon discovered the donkey was no use, so he took it to a mountain and left it there.

A tiger saw the donkey and thought it was a mysterious beast. He hid himself carefully in the woods, and dared only to watch the donkey from a distance. One day, the donkey brayed. The tiger thought the donkey was going to bite him. But the donkey did nothing more.The tiger soon got used to the noise, and moved closer. At last, he decided to provoke the strange beast. The donkey couldn't put up with this, and gave the tiger a kick. But the kick didn't hurt very much. The tiger knew this donkey was weak. He sprang on the donkey and made a good meal of the donkey.
Later, people use it to describe someone who is at his wit's end.