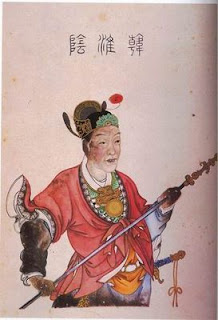 During the Spring and Autumn Period(770－476BC), there were two famous senior officials in the State of Yue. The King of the Yue named Gou Jian didn't accept the advice of Fan Li and blindly launched an attack against the neighboring State of Wu. As a result, he suffered disastrous defeat and was caught by the King of Wu. The King of Wu took him back and had him as a slave. Fan Li persuaded him to endure humiliation, pretend to surrender and wait for an opportunity to avenge.

Later, Wen Zhong went to the State of Wu on diplomatic missions and helped Gou Jian gain the confidence. Years later, Gou was set free. With the help of Fan and Wen, the State of Yue rapidly rehabilitated and later annexed the Wu.

As they had done so much contribution, both Fan and Wen was awarded great riches. Gou Jian even offered half of the state to Fan. But Fan rejected and decided to live in seclusion for knowing Gou too well. As a hermit, Fan wrote to his friend Wen. In his letter, Fan said,

"When all the flying birds have been shot down, the good bow is put away; when all the hares have been bagged, the hounds are killed for food. I suggest you withdraw in order to avoid disaster." Wen took his advice and pretended to be ill and stopped attending imperial court meetings. But it was too late. Gou Jian believed the slanderous gossips about Wen and ordered Wen to kill himself.

Later, people use it to mean trusted aides are eliminated when they have outlived their usefulness."