Three at Dawn and Four at Dusk 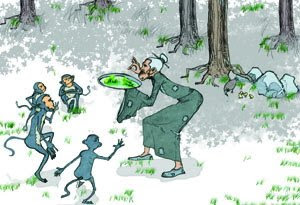 In the state of Song there was a man who kept monkeys. He was very fond of monkeys and kept a large number of them. He could understand the monkeys and they could also understand him. He reduced the amount of food for his own family in order to satisfy the monkey's demands.
After a while his family did not have enough to eat, so he wanted to limit the food for the monkeys. But he was afraid that the monkeys would not submit to him.
Before doing that he first played a trick on them, "If I give you three chestnuts in the morning and four in the evening, would that be enough?" he asked the monkeys.
All the monkeys rose up in a fury. After a short time he said, "If I give you four chestnuts in the morning and three in the evening, would that be enough?" All the monkeys lay on the floor, very happy with this proposal.