Adding feet to a drawing of a snake 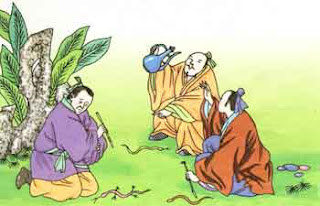 An official in the ancient State of Chu gave a pot of wine to his men to celebrate the Spring Sacrifice ceremony. One of the men said: “We have only one pot of wine, and it’s only enough for one. So, let’s play for it. The first one to finish drawing a snake in the ground wins the pot of wine.”

The others agreed and started drawing their snakes in the ground.

Then, there was a winner, or so he thought. He had finished his drawing and reached for the pot of wine. But, when he saw that the others hadn’t finished their drawings, he arrogantly said to them: “How slow you are! The way you’re going, I can add feet to my snake and still win the pot of wine.”

So, he did. He added feet to his snake. But before he could finish, another man grabbed the pot of wine and said: “What snake has feet? That’s not a snake! So, I win!”

The moral of the story is that sometimes going too far can be as bad, or worse, than not going far enough.

Sharon said…
How lovely. Your English is not perfect, but the sense is clear and reading these fables is enlightening. Thank you.
23 January 2009 at 15:44