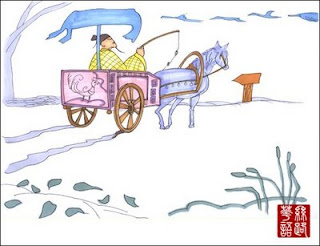 A certain northern traveler intended to travel to Chu. He started his journey on horseback by the foot of the Tai Hang Mountain by a way leading north. His friend was very surprised so he asked:

"Chu is situated in the south so why you northward instead of going southward?"

"Never mind", the traveler replied obstinately, "my horse is a good steed. It runs very fast."

"No matter how fast it runs," said his friend, "you can never reach Chu by going northward."

"I have prepared sufficient traveler expenses." replied the traveler.

"Sufficient traveling expenses cannot help you, either." continued his friend.

"Well," answered the traveler still more obstinately. "I have a strong and capable groom at my service."

"No groom, how capable and strong he may be, can be of any use to you if you stick to going northward." concluded his friend.

The traveler did not listen to his friend and so he never reached Chu.

Because the earth is round, that travellers might get to Chu at las if he kept going norhternward, but did he have morden scientific knowledge about the earth?