Burn not your house to rid it of the mouse 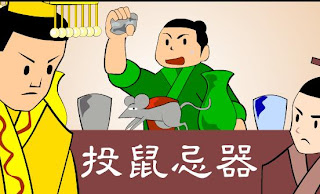 There is a story in the book of Hanshu telling of a rich man, who being a lover of vase and had a large collection of it. Among them was a rare vase made of jade. The vase of exquisite workmanship and of historical value and he loved it dearly.

One night he noticed a mouse passing near the precious vase. The mouse jumped into the vase and was trying to eat some food which the man had carelessly left there.

The sigh infuriated the man and in a fit of rage he threw a stone at the mouse. For sure, the mouse was killed, but the precious vase was broken also.

The loss of the vase pained the man greatly and he deeply regretted his own thoughtlessness, which bought him this unrecoverable loss.

He now realized that any one, who cares for the present and overlooks consequences, is apt to bring disasters upon himself. So he exclaimed to warn people by saying do not burn you house to get rid of a mouse.

zhugw said…
I think the story is not based on truth! First, the man seems is a rich man and the scene of the story seems is the bedroom. So I don't think a mouse could appear in this circumstance. Besides, we all know mouse is very clever. It is a little difficult to believe a human being can easily hit a mouse by stone. So author just made up the story for the moral.
28 July 2011 at 05:54