Jingwei bird determines to fill up the sea 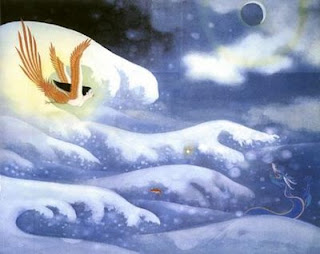 Once upon a time, the youngest daughter of Emperor Yandi, legendary ruler of primitive China, went boating on the Eastern Sea. While she was enjoying herself, a strong wind rose on the sea and her boat capsized. Just before she was buried by the surging waves, she turned into a beautiful bird. The bird looked like a crow, but had a colorful head, a white bill and two red claws. She lived on Fajiu Hill where grew a lot of mulberry bushes, and when she flew over the roaring sea, it cried sadly in the sound "jinwei, jingwei". That was why people called it "Jingwei".
Jinwei hated the sea so much that it decided to fill it up. Every day, it flew to and fro between the mountain and the sea, carrying a twig or a pebble from the mountain and dropping it into the sea.
One day, the roaring sea said to Jingwei, "Poor little bird, stop doing that meaningless thing! You'll never fill me up." Jingwei replied, "I'll fill you up no doubt! I will, even if it'll take me thousands of years! I'll fight on until doomsday!"
The brave little bird kept carrying twigs and pebbles from the mountain to the Eastern Sea without taking a rest.
From this fable comes the idiom "The bird Jingwei trying to fill the sea". It is so hard for a little bird to fill the sea up in such a way! But it is still commendable for its determination and tenacity.