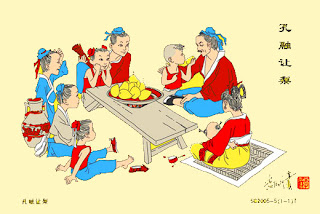 Kong Rong (153-208), the 20th generation descendant of Confucius, was a high official during the reign of Emperor Ling of the Eastern Han Dynasty. As he was good-tempered and hospitable, his house was always full of guests. He was a noted poet and was one of the “Seven Famous Personages of Jian An.”
Kong Rong was once appointed the prefect of Beihai, hence named Kong Beihai. During his tenure of office, Kong Rong constructed cities, built schools, and advocated Confucianism. Kong Rong upheld etiquette, and had made his name heard in his childhood for a "giving up the biggest pear" story.
In Kong Rong’s Family, there were seven brothers in his family and Kong Rong was the sixth son. When he was four years old, he was asked to choose a pear in priority. However, Kong Rong choose a smallest pear, leaving big ones to his elder brothers. Every time the siblings ate pears, his elder brothers always took big ones. He, however, always picked up the small one.
When asked by the adults of the family, he answered: “I ought to take the small one as I am the youngest child.” Hence, he was praised by the clan.His behavior won the praise of others.
This story has been handed down since then as a much-told story featuring etiquette and modesty. It is also the long-prevailing exemplary story for children's formative education.