Look for a noble steed according to its picture 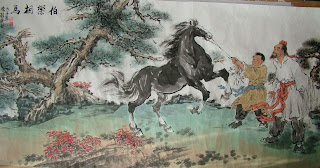 Bo Le was a famous horse-judging master. He wrote a book titled Xiang Ma Jing (classics of how to judge a horse) to tell people the way of recognizing good horses. It writes, "A good horse is with wide forehead, bulging eyes and round hoofs."

One day, the son of Bo Le went out to look for a good horse according to the description in the book. After a while, he came back, bringing with him a toad.

He told his father, "I have found a horse similar to your picture but its eyes are not bulging enough and hoofs not round." Bo Le did not know whether to laugh or to cry at this.

He kidded his son, "This horse is good at jumping instead of being ridden. What you've done is to look for a horse according to the picture."

From what Bo Le said we draw the idiom, depicting those who work mechanically or try to locate something by following up a clue.