The Monkey King and Mango 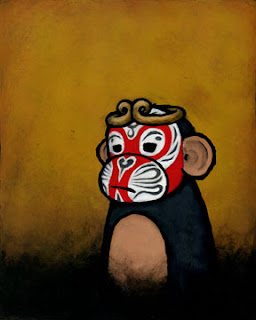 There was once a kingdom of monkeys in the forest. The King of the Monkeys was very very large, and was very kind and wise. One day, the King was strolling & he noticed mango trees along the side of a river. He also noticed a human castle downstream. He then ordered the monkeys to remove all the mangoes from these trees, "or there would be disaster". The monkeys did not understand the King's intention, but they did as told anyway. All the mangoes were taken off these trees except one. This one was hidden behind a nest.

One day, this mango was ripe and fell into the river. It flowed downstream where the human King was having a bath. He noticed the mango & asked the Prime Minister what it was. The PM told him it was a "mango", a fruit of wonderful taste. The King then ordered that the mango be cut into small pieces & he gave a small piece to each of his ministers. When satisfied that the mango was not poisonous, he ate the rest of it & realized how tasty it was. He craved for more.

The next day, the human king, with his troops, went upstream to search for more of these fruits. There were lots of mango trees, but also lots of monkeys. The human king doesn't want to share the mangoes with the monkeys, so he ordered all of them to be killed. A massacre started.

With his huge body, he formed a bridge over the cliff and thousands of monkeys trampled over him to reach the safety of the bamboo forest. He endured all the pain. One monkey did not like the King & he saw this as an opportunity to get even. As he was crossing over the King's body, he pierced a spear through the King's heart. The King screamed in pain but endured the pain until all his subjects were safely across. Then he collapsed.

The human king was so touched that he decided to be a good king from that day and he ordered that the monkeys in the bamboo forest be protected from harm forever.