Snake-like Reflection of a Bow in the Cup 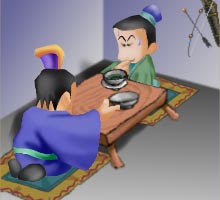 Nearly 2,000 years ago, during the Han Dynasty, there was a county magistrate called Ying Chen. One summer day, he invited his secretary Du Xuan to his house and treated him with wine. On the north wall of the room hung a red bow. It was reflected in Du Xuan's cup. Du Xuan took the reflection for a squirming snake. He was very frightened but he dared not turn down Ying Chen's offer because Ying was his superior. He had to swallow the wine with his eyes closed.

When he was back at home he felt so painful in his chest and stomach that he could hardly eat and drink any more. He sent for the doctor and took some medicine, but nothing could cure him. When Ying Chen asked Du Xuan how he got so seriously ill, Du told him he drank the wine with a snake in his cup the other day. Ying Chen found something strange about that. He returned home , thought hard, but he could not find an answer. Suddenly the shadow thrown by the bow on the wall caught his eye. "That's it!" he shouted. He immediately sent his man to fetch Du Xuan. He seated him where he sat before and offered him a cup of wine. Du Xuan saw the snake-like shadow again. Before Du was scared out of his wits again, Ying Chen said , pointing at the shadow, "The 'snake' in the cup is nothing but a reflection of the bow on the wall!" Now that Do Xuan knew what it was, he felt much easier. And strange enough, his illness disappeared the next moment.