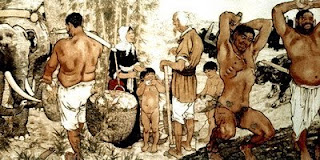 There were two high mountains between Jizhou in the south and Heyang in the north. One was called Taihang Mountain and the other Wangwu Mountain. Both of the mountains were very high.

Just to the north of the mountains lived an old man called Yu Gong (literally means "foolish old man")who was nearly 90 years old. With the two high mountains just in front of his house, his family and he had to walk a long way around the mountains whenever they had something to do on the other side of the mountains.

One day, Yu Gong called all his family together to talk about how to move the two mountains to other places. His wife said, "An old man like you cannot even move a small hill, not to mention the two high mountains. Even if you can, where can you throw so much earth and stone?"
"the Bohai Sea is big enough to contain all the earth and stone," Yu Gong said.

So it was decided. His children started to dig the mountains, led by the old man Yu Gong.

A man named Zhi Sou (literally means "wise old man")saw them working and tried to stop them, saying, "You are so silly! You're so old and weak that you can't even take away the grass and trees. How can you move the high mountains?"

"You're wrong," Yu Gong said with a sigh. "Look, my sons can continue my work after my death. When my sons die, my grandchildren will continue. So generations after generations, there's no end. But the mountains can't grow higher. Do you still say I can’t move them away?"

Later the Jade Emperor (the highest God in the Heaven), upon learning of Yu Gong’s story, was greatly moved. He then ordered god of strenghth (Da Li shen, Hercules) to come down and take the two high mountains away.

The story tells us that so long as one is determined and sticks to it long enough, anything can be done, no matter how difficult it is.