Fooling the nobles with the beacon 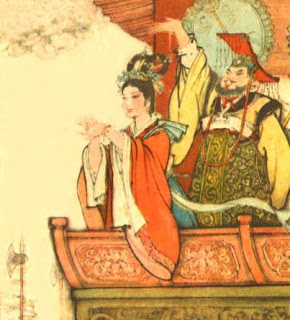 King You of Zhou was the twelfth sovereign of the Chinese Zhou Dynasty and the last of Western Zhou Dynasty.

In 779 BC, Baosi entered the palace, became loved by King You, and had a son Bofu born. King You deposed Queen Shen and Prince Yijiu. He made Baosi the new queen and Bofu the new prince.

Baosi did not like to laugh. After failing many methods, King You tried to impress his favorite queen Baosi by fooling the nobles with the beacon into thinking that there was danger of enemies attacking. They came to the castle only to find themselves being laughed at by Baosi while there were no enemies. Once King You impressed Baosi, he kept abusing the beacon, but he would then lose the trust from the nobles so they would disregard his lightened beacon.

Deposing Queen Shen and Prince Yijiu upset Queen Shen's father who would get outside force to attack King You. Eventually, when danger did come, King You called for the nobles with the already abused beacon but none came, thinking that the king was fooling them again. In the end, King You and Bofu were killed and Baosi was captured. King You's death marks the end of the Western Zhou Dynasty.