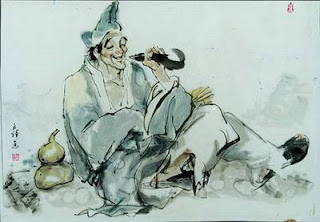 Jigong was born a mortal, but believed to be a living Buddha who was the incarnate of the Taming Dragon Arhat, he was also called "Mad Monk", or "Crazy Monk". Unlike a traditional Buddhist monk, he ate meat and drank wine. Other monks in the monastery, bewildered and fed up with his behavior, expelled Ji Gong from the monastery. From then on, Ji Gong roamed the streets and helped people whenever he could.

Ji Gong was depicted as smiling in his tattered monastic robes, and usually carries a bottle of wine in his right hand, and a fan which was believed to be magical in his left hand. He wears a hat with the Chinese character Fo, meaning "Buddha". He can also be seen holding his shoes in his right hand.

Bellow is the theme song of The Legend of Ji Gong Television series，describing his eccentric yet benevolent and compassionate nature and his peculiar way of cultivating in the Buddha's teaching :

Shoes worn,
Cap torn,
My cassocks are worn out.
You laugh at me,
He laughs at me,
My fan is broken.

Not vexed,
not annoyed,
not worried,
Seeing through the good and bad.

Keep on going,
happy all the way,
where there is injustice there I am.

Shoes worn,
Cap torn,
My cassocks are worn out.
You laugh at me,
He laughs at me,
My fan is broken.


Making trips everywhere,
Carefree at heart though it is a lonely journey;
Keep on going,
happy all the way,
stealthily board the virtuous on dharma boat.