Custom of swearing witnesses in use in China 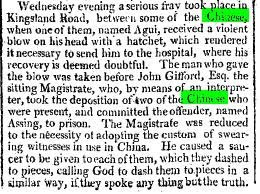 Friday's Post
The Ipswich Journal (Ipswich, England), Saturday, September 5, 1801; Issue 3575.
Wednesday evening a serious fray took place in Kingsland Road, between some of the Chinese when one of them, named Agui, received a violent blow on his head with a hatchet, which rendered it necessary to send him to the hospital, where his recovery is deemed doubtful.
The man who gave the blow was taken before John Gifford, Esq. the sitting Magistrate, who, by means of an interpreter, took the deposition of two of the Chinese who were present, and committed the offender, named Assing, to prison.
The Magistrate was reduced to the necessity of adopting the custom of swearing witnesses in use in China. He caused a saucer to be given to each of them, which they dashed to pieces, calling God to dash them to pieces in a similar way, if they spoke any thing but the truth.