Every Bush and Tree Looks like an Enemy Soldiers 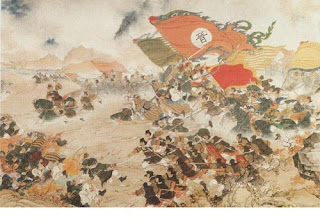 In AD 383, the King of Former Qin, Fu Jian, led a huge army to attack Eastern Jin. After losing the first round of fighting, Fu Jian looked down from a city wall, and was terrified when he saw the formidable battle array of the Eastern Jin army. And then looking at the mountains around, he mistook the grasses and trees for enemy soldiers. As a result, when the nervous Fu Jian led his army into battle, it suffered a crushing defeat.

This idiom, Cao Mu Jie Bing, describes how one can defeat oneself by imagining difficulties, and people may be easily frightened in emergency.

People are very easily scared, during the Second World War, British people were frightened by German air-raid, they applied themselves rigorously to construct air-raid shelters, to stick sticky strips on their windows to reduce danger from flying glass and to install effective Black-outs, everyone got gas mask.

One story tells that one family was not ready when that first siren sounded, so they hurriedly dressed, ran to their neighbor's shelter, hid there for hours, with ears alert for any sound. One of them said,'Listen! What's that noise?" Whistling noise and a noise like air escaping. Another replied, "It's only me trying my gas mask on!"

They built many public anti-air-raid shelters, and appointed wardens. A man recalled this funny situation and saying, "My father had the key and it was his responsibility to open it every time the sirens went. This he did reliably and he used to say that, to his knowledge, NO ONE ever went in."

Many cities and towns has set up Air Raid Patrol, Fire Watchers, Emergency Water Supply, etc, etc. One story tells that three fire-watchers went on duty one evening along the Street Bridge, near a railway. They discovered some sleepers burning quite fiercely at the far end of the Street Bridge, which probably set alight by some sparks from a passing railway engine. With the help of some water bucket carrying neighbours, they should be able to put the fire out. But they seemed too scare to think about, one of them went to the Warden's post to report the fire while the others stay to keep on watching.

The sky was certainly aglow that night by the fire, it looked as though a lot of incendiary bombs were being dropped so one of them decided to follow the fire watcher's instructions and blow his whistle. He blew his whistle. Short blasts. He blew again. Short blasts. And yet again. He waited. And he said, "Not a sausage turned out. Not a single sausage."

But suddenly, there was a great flurry of activity. People in helmets; people with buckets; people with stirrup pumps, and a fire appliance with hoses and a ladder all appeared. Down the street they all went, fire engine and all, when crash, crunch - the ladder was too high and the bridge was too low. The fire engine was stuck under the bridge. Stuck and immobile. Only one thing to do! Let the tyres down and push it out!

You can no longer drive under that Street Bridge, but for many years after there were notices at either end about low headroom. They've been there since the night that fire-watcher blew his whistle.

These stories may be the right footnotes for this Chinese idiom, every bush and tree looks like an enemy, but the German air-raid terror was real stuff!