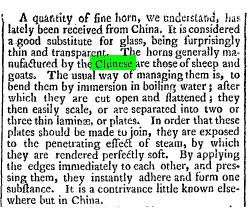 A Quantity of fine horn, we understand, has lately been received from China, It is considered a good substute for glass, being surprisingly thin and transparent. The horns generally manufactured by the Chinese are those of sheep and goats. The ususal way of managing them is, to bend them by immersion in boiling water; after which they are cut open and flattened; they then easily scale, or are separated into two or three thin laminae, or plates. In order that these plates should be made to join, they are exposed to the penetrating effect of steam, by which they are rendered perfectly  soft. By applying the edges immediately to each other, and pressing them, they instantly adhere and from one substance. It is a contrivance little known elsewhere but in china.