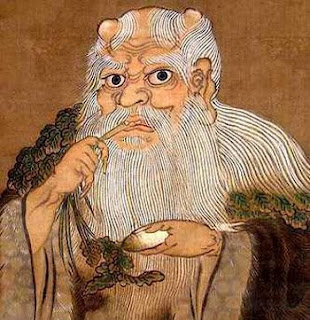 The blazing god, Shen Nong, named Nu Deng, was of the Qiang family. His mother was influenced by a sacred dragon, she brought forth the blazing god with a man's body and an ox's head.

He grew up on the banks of the Qiang River, whence he derived his surname.

As he ruled by the influence of the element fire, he was called 'blazing god', and named his officers by the help of fire.

"he cut down trees to make agricultural implements, bending timber into the shape of plough handles and spades, and taught the people the art of husbandry. As he was the first to give lessons in agriculture he was style 'divine husbandman'. Then sacrifices were offered at the close of the year, and red thongs used for garlanding plants and trees. He was the first to taste the different herbs, and first to make use of them for medical purposes.

He also made the five-stringed lute." He taught people how to hold mid-day markets, when they bartered their wares and retired, everyone having got what he wanted. He reduplicated the eight Trigrams, and thus obtained sixty-four symbols. He first of all had his capital at Chen, and then dwelt at Qufu. After reigning 120 years he died, and was buried at Changsha.