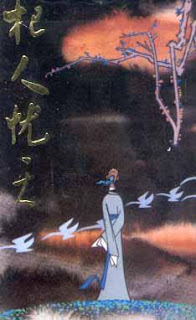 There was once a man in the Ch'i State who was so afraid the universe would collapse and fall to pieces, leaving his body without a lodgment, that he could neither sleep nor eat.

Another man, pitying his distress, went to enlighten him. 'Heaven,' he said, 'is nothing more than an accumulation of ether, and there is no place where ether is not. Processes of contraction and expansion, inspiration and expiration are continually taking place up in the heavens. Why then should you be afraid of a collapse?' The man said: 'It is true that Heaven is an accumulation of ether; but the sun, the moon, and the stars--will they not fall down upon us? His informant replied: 'Sun, moon and stars are likewise only bright lights Within this mass of ether. Even supposing they were to fall, they could not possibly harm us by their impact.' 'But what if the earth should fall to pieces? 'The earth,' replied the other, 'is merely an agglomeration of matter, which fills and blocks up the four comers of space. There is no part of it where matter is not. All day long there is constant treading and tramping on the surface of the earth. Why then should you be afraid of its falling to pieces? Thereupon the man was relieved of his fears and rejoiced exceedingly. And his instructor was also joyful and easy in mind.

But Ch'ang Lu Tzu laughed at them both, saying: 'Rainbows, clouds and mist, wind and rain, the four seasons--these are perfected forms of accumulated ether, and go to make up the heavens. Mountains and cliffs, rivers and seas, metals and rocks, fire and timber--these are perfected forms of agglomerated matter, and constitute the earth. Knowing these facts, who can say that they will never be destroyed? Heaven and earth form only a small speck in the midst of the Void, but they are the greatest things in the sum of Being. This much is certain: even as their nature is hard to fathom, hard to understand, so they will be slow to pass away, slow to come to an end. He who fears lest they should suddenly fall to pieces is assuredly very far from the truth. He, on the other hand, who says that they will never be destroyed has also not reached the right solution. Heaven and earth must of necessity pass away, but neither will revert to destruction apart from the other.

The Master Lieh Tzu heard of the discussion, and smiling said: 'He who maintains that Heaven and earth are destructible, and he who upholds the contrary, are both equally at fault. Whether they are destructible or not is something we can never know, though in both cases it will be the same for all alike. The living and the dead, the going and the coming, know nothing of each other's state. Whether destruction awaits the world or no, why should I trouble my head about it?