Suspect the neighbor of stealing an axe 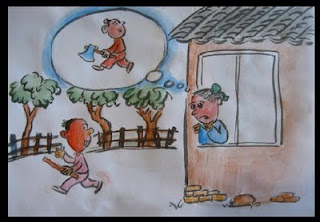 A man, having lost his axe, suspected his neighbour's son of having taken it. Certain peculiarities in his gait, his countenance and his speech, marked him out as the thief. In his actions, his movements, and in fact his whole demeanour, it was plainly written that he and no other had stolen the axe. By and by, however, while digging in a dell, the owner came across the missing implement. The next day, when he saw his neighbour's son again, he found no trace of guilt in his movements, his actions, or his general demeanour.

'The man in whose mind suspicion is at work will let himself be carried away by utterly distorted fancies, until at last he sees white as black, and detects squareness in a circle.'