the Cowherd and the Weaver Girl

October 28, 2009
The book, the Record of Years and Seasons of Jing Chu, published in the Southern and Northern Dynasty (420—589 AD), recorded a story about the Cowherd and the Weaver Girl:

In the east of the Heavenly River, there was a weaver girl, who was the daughter of the Emperor of Heaven. She worked very hard on the loom year after year, weaving colorful clouds and heavenly clothes. The Emperor of Heaven took pity on her loneliness, he married the weaver girl to a cowherd lived in the west side of the Heavenly River. But the weaver girl totally neglected her weavering task after she was married. The Emperor of Heaven became very angry, and ordered her to return to the east of the River, only allowed the couple to be together for a single night, which is the seventh night of the seventh moon.

In this variation of the Cowherd and the Weaver Girl story, the weaver girl was a daughter of the Emperor of Heaven, instead of the grand daughter, and we don't know if she was the seventh girl, who was the youngest of the seven fairy sisters . And the Cowherd also lived in heaven, west side of the Heavenly River, which implies that he might be an immortal as well. Their marriage was consented and arranged by the Emperor of Heaven himself, there is no romantic incidents such as seven fairy sisters bathing in a lake, the cowherd stealing the weaver girl's clothes, and there is no talking cow either. 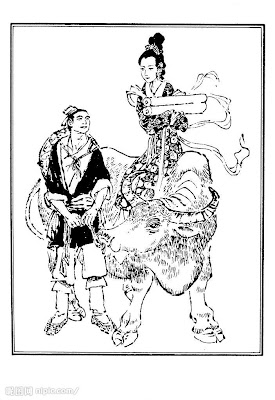