Dong Yong and the Seventh Fairy

October 28, 2009
In the Han Dynasty lived a man by the name of Dong Yong. His family was poor when he was a small child. When his father died, he was willing to sell himself into slavery for a little money for the funeral. Moved by his filial piety, the youngest daughter of the Emperor of Heaven secretly came to the secular world. With the soil as their matchmaker, they held a wedding under an old locust tree. In order to repay the debt, the couple returned to the master to work as slaves. Since the fairy could weave ten bolts of fine silk overnight, the master cut down Dong Yong’s hire period from three years to one hundred days. On the expiration, the couple were returning home when the God of Heaven made an edict that the fairy should go back to the heavenly palace. Shedding tears, the fairy had to part with Dong Yong under the old locust tree. She flew into the sky and vanished. 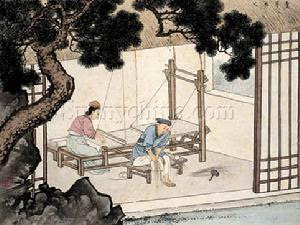