The Legend of Lady White

October 20, 2009
Lady White and Xiaoqing (literally, Xiaoqing means little Cyan or little blue), two spirits of snake in fact, came down to earth to seek the little boy who had saved the life of Lady White when she was small and stayed in her heart ever since. When they visited Westlake, Hanzhou, they meet a very handsome young gentleman, whose name was Xu Xian. He turned out to be the very man they had been looking for. Lady White and Xu Xian (literally means an imortal whose surname is Xu) fell in love with each other and later with the help of Xiaoqing they got married. They lived happily in a villige nearby Westlake. They took a walk on the Su Causeway, or rolled painted boat together on the Westlake, as time went by, Lady White become pregnant.

At the time of Dragon Boat Festival (Duanwu, double five festival, on the fifth day of the fifth month of each year), it was the custom for every household to fasten plants such as calamus and Chinese mugwort on the ground to drive away spirits, which were surely dangerous to Lady White and Xiaoqing. On that day, Lady White took a sip of realgar with yellow wine mix, which also believed to be useful to get rid of evil spirits and other harmful things, prepared by Xu Xian which caused her to lose her superior magic skills and become a large white snake. Xu Xian was greatly shocked when he saw the snake on the bed. He fell to the floor and died. When the power of realgar faded away, Lady White resumed her human form. She was heartbroken to find Xu Xian lying dead beside the bed.

To restore Xu Xian to life, Lady White flew to the Kunlun Mountain (in the western part of China)to steal ganoderma, a celestial herb. There after a battle between Lady White and the heavenly guards, the Immortal of the Southern End appeared, who was impressed by Lady White’s sincerity and perseverance, finally granted her the glossy ganoderma. Xu Xian came back to life and his suspicions were allayed by a story made up by Lady White and Xiaoqing.

Later, a Buddhist monk named Fa Hai found out that Lady White actually was a spirit of a snake, he persuaded Xu Xian to divorce lady White, but his advise was refused by Xu Xian. Then he forced Xu Xian by cheating and threatening to hide in Jinshan Temple where the monk lived, and locked him up. In order to save her husband, Lady White summoned up surging flood to Jinshan Temple where lived Monk Fa Hai. While she was fighting with Monk Fa Hai, she gave birth to a boy, who was named Wu Qilin,. Because of the labour, she became very weak, and lost her superior magic skills. Finally, she failed in the fight and was suppressed by Fa Hai under the Leifeng Pagoda by West Lake.

Then Monk Fa Hai released Xu Xian. Xu Xian lived with his little son Xu Qilin. When Xu Qilin grew up, he turned out be a very intelligent young man, and loved to learn. He attended the Imperial Civil Service Exam, and became a Promoted Scholar (Zhuang Yuan in Chinese, which was the highest degree in the Imperial Civil Service Exam system). The Emperor appreciated his talent and learning so much that he betrothed his own daughter to Xu Qilin, then Xu Qilin married with the princess and became the son-in-law the His Majesty. Now he had the power to demolish the Leifeng Pagoda, and liberated his mother.

The Xu family lived happily ever after! 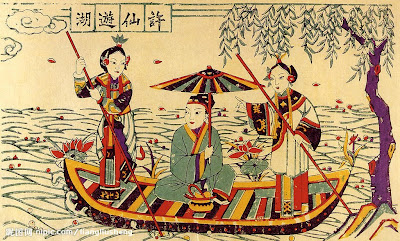