Lu Ban was born in the state of Lu during the Spring and Autumn Period. His real name was Gongshu Ban, also known as Gongshu Zi. He was an outstanding civil engineer and craftsman in Chinese history and was once an official in the civil engineering department. His craftwork has been circulated for thousands of years, earning him great esteem. Carpenters, stonemasons, bricklayers, an other construction industry and furniture manufacturers all worship Lu Ban as the founder of their profession.

Lu Ban was born in the afternoon on May 7, 507 B.C. At the time of his birth, cranes gathered together and an exotic fragrance permeated the house. At the age of fifteen, he was suddenly awakened to his life’s purpose and went to study under Duanmu.

Lu Ban invented Flying Bird which is the prelude of today's airplane
He was a great inventor and taught many students. The books of Hanfeizi, Huainanzi, Lun Heng, and Mozi all recorded that Lu Ban made a bird from wood. After Lu Ban set it to flight, the bird stayed up in the air for three days. In the book of Hongshu, it was said that the wooden bird could take a man up in the air to spy on the enemy. This ingenuous design was the prelude of today’s scout planes.

When he was building a pagoda in Liangzhou, which was far away from his home, he made a wood kite in order to return home. Each time all he needed to do was just knock on the wedge of the wood kite thrice. Then he could go home by riding on the wood kite. Soon his wife got pregnant, for which his parents became quite suspicious of her chastity because they thought their son was always away from home. So she told them all the details. Later, Lu Ban’s father secretly knocked on the wedge a dozen times, which took him to the territory under the Wu people’s control. The people there took him for a monster and killed him. Lu Ban made another wood kite and found the corpse of his father by it. With a grudge against the Wu people, Lu Ban created a wood celestial being, whose hand pointed southeastwards. As a result, the territory of the Wu people was stricken by a three-year drought. Through divination, the Wu people learned it was due to Lu Ban. They presented generous gifts to apologize for the offence. Lu Ban cut off a hand of that wood immortal. On that day, a pouring rain fell in the central Wu territory.

Tradition has it that Lu Ban once carved a crane out of the wood, which could take a flight as far as 700 li each time. Later it was put on the western summit of the North Mountain. Once Emperor Wudi of the Han Dynasty sent for it, which then flew to the southern summit of the Tianmu Mountain. Often when it was about to rain, the wood crane would flutter its wings as if it would soar high.

He invent several notable tools which is still being used by carpenters today. One of these is a carpenter’s ink marker(Mo Dou). Legend has it that when Lu Ban first drew a line using the modou, he asked his mother to hold the other end of the string. Then they finished the work together. Later, Lu Ban didn’t want to tire his mother by always asking her to help, so he made a hook at the end of the string so that his mother didn’t need to hold it any more. In order to commemorate Lu Ban’s filial piety, successors named the hook ban mu or mu gou (mu means “mother” in Chinese).

He also invented other tools, such as the drilling hook, the stone mill, the shovel, dividers, and the ruler. It was said that Lu Ban invented the saw after his finger was cut by a blade of grass. Lu Ban also made the cloud ladder and the nine implements used in warfare. He also made the earliest three-dimensional topographical map, Jiu Zhou Tu, which was highly respected by Chinese emperors in history.

It was said that Lu Ban made the magnolia boat on the Xunyang River of the Qili Islet and the wood crane on the southern summit of the Tianmu Mountain is also said to be his product.
Lu Ban was ingenious in craftsmanship.

Lu Ban competed in craft with her sister
There are two stone bridges over the Xiao River in Zhaozhou, one in the south and one in the west. Legend goes like this. The big one in the south of the town was built by Lu Ban, while the small one in the west, by Lu Jiang, who was Lu Ban’s younger sister. Once, Lu Jiang wanted to compete in craft with her brother. They agreed that each should build a bridge overnight before the cock’s crow. Lu Jiang hurriedly went to the west of the town to prepare the material. She finished setting it up at midnight. Quite contented, she went to inspect the work of her brother. She found Lu Ban herding a flock of sheep towards the riverbank. As she gazed, she found out that they were not sheep but white rocks, fine and glossy. She realized that her bridge could not be compared with that of her brother. She hastened back and began to carve on her bridge with great care. She carved on the bridge rails the designs of the Cowherd and the Girl Weaver and of the red phoenix illuminated by the sun. Finishing this, she returned. The bridge of Lu Ban was almost finished, only short of two rocks. Lu Jiang could not wait any longer so she imitated the cock’s crow, which caused the cocks far and near to follow suit. Hearing the crow, Lu Ban put the two rocks down in a hurry, his construction finished. Two bridges rose on the Xiao River overnight, which caused a sensation for miles around the next day. Even the Eight Genii got the news as well. Zhang Guolao, one of them, rode on his donkey, with the sun and the moon in his bag. Furthermore, he invited the Lord of Firewood to come with his one-wheel cart, carrying the four famous mountains. The two arrived in Zhaozhou. As soon as the donkey and cart were on the bridge it began to shake. Lu Ban ran to support underneath it with his two hands. With the herculean pressure, the bridge, instead of collapsing, was even more solid. Up to the present, there still remained the footprints of Zhang Guolao’s donkey and the tracks left by the cart of the Lord Firewood. Beneath the bridge, Lu Ban’s two big palm prints were still distinct. 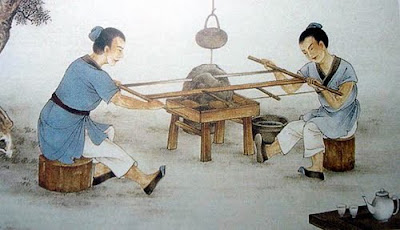