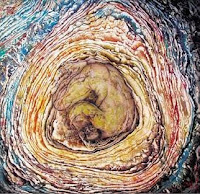 In the beginning, the universe was all blackness and emptiness. Then suddenly a bubble appears, which becomes a ball of smoke, Then it begins to coalesce and grows and grows for millennia, eventually becomes a red, egg-shaped object, inside this object lies Pan Gu.

After 18,000 years, Pan Gu awakes. Appalled by the infinite blackness, he throws open his arms and legs to break this suffocating emptiness, separating heaven and earth. The clear and light positive energies rise gradually, becoming the sky. The turbid and heavy negative energies descend gradually, becoming the earth. But the breach between heaven and earth is not large enough; Pan Gu is still confined. He will not let the opening close up again, returning to void. So he plants his feet firmly on the ground, puts his hands on the sky and forces them further apart. From then on, the sky will become one zhang higher, the earth one zhang denser, and Pan Gu one zhang taller every day. After another 18,000 years, Pan Gu had grown to a height of 90,000 li, his head in the sky and feet on the ground.

Pan Gu lived untold lonely years in this realm of his making, and then finally perished. His body which separated the sky and earth fell to the ground with a crash. His bones becomes mountains,  his arteries now are our rivers, his flesh is our rich, fertile soil. His hairs are the plants. His teeth became gold and jade and other minerals. His sweat is now our dew, providing moisture to the life on earth. his sighs, and breath became wind, and and his tears become our rains. Lightning in the sky was his blinking eyes and thunders his snores.