Point to the Deer and Make it a Horse

November 13, 2009
In the reign of Emperor the Second of the Qin Dynasty (Qin Er Shi, 221-207 B.C.), the prime minister Zhao Gao, was very afraid of officials plotting against him, he arranged for a way to discover those that were against him.

One day, before Qin Er Shi and the gathered officivals, Zhao Gao reported that he had acquired a fine horse and wished to give it to the emperor. Qin Er Shi, pleased with this offer, ordered the horse to be brought it. A servant brought in a deer.

Qin Er Shi laughed heartedly and said to Zhao Gao, “Why Prime Minister, that is no horse, it’s a deer!”

Zhao Gao lowered his head and replied: “Your Highness, even your dragon eyes must sometimes be at fault. Why, this is plainly a horse!”

The second emperor thought that Zhao Gao meant this to be a joke and said to the assembled officials: “Very well! The Prime Minister says that it is a horse, and I say that it is a deer. Will the officials offer their opinions on whether this animal is a horse or a deer?”

This question struck the officials dumb. This animal was of course a deer, but saying that it was a deer would go against Zhao Gao’s wishes, but then again, saying that it was a horse would be lying to the emperor. Seeing this hesitation, Zhao Gao became enraged and spoke angrily to the assembled officials.

“Let the assembled officials see, those four sturdy legs, the proportion of its body, long ears and short tail, if this isn’t a horse, then what is it?”

Some of the officials hurriedly went forth and told Qin Er Shi that the animal was indeed a horse. Others stuttered out that it was certainly not a deer. Still others did not say anything at all. The second emperor, upon hearing these comments, actually believed that he was indeed staring at a horse, and his eyes must have been at fault the first time. Zhao Gao arrogantly left the court and it is no surprise then, that a few days later, he had the officials that had said nothing arrested and executed on made up charges. 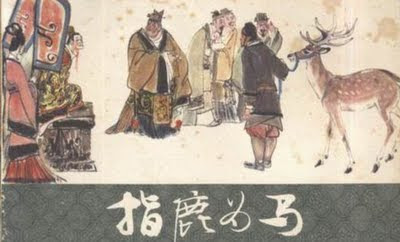