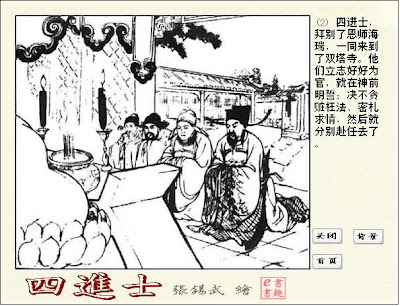 Once upon Ming Dynasty, there were four friends named Máo Péng, Tián Lún, Gù Dú, and Liú Tí. They all passed Imperial Civil Service Examinations, and received the "Metropolitan Graduate" degree. This was the highest degree of the time, as the candidates were interviewed by the Emperor himself, so the degree also called "Received Scholar" or "Promoted Scholars" (进士, Jìn Shì).

All of them were apointed important magisterial posts. Graduate Máo Péng was appointed as Inspector of Eight Prefectures, Tián Lún  the Inspector of Jiāngxī Province (same as Provincial Governor), Gù Dǔ the Governor of Xìnyáng City, Liú Tí the magistrate of County Upper-Chài, which was at the next lower bureaucratic level than Xìnyáng, also in Hénán Province. Before the four graduates went to their office, they bid fareware to their Supervisor (who was also their examiner, according to the tradition), and went to Twin-Pagoda Temple after the celebration feasts. The four friends knelt down in front of the altar, and sworn to the Buddha to be incorruptible officials who would uphold the law.

There's a saying, a Taoist finds the true Way of Life and immortalised, all his pat chicken and dogs rise to the Heaven. Graduate Tián has an older sister who was married to a Yáo family in County Upper-Chài where Graduate Liú was the Governor. Both of the Yáo brothers, Yáo Tíngchūn and Yáo Tíngméi, were married and lived with their widowed mother. Learning that her brother's success, woman Tián became very arrogant. She turned out to be such a shrew that her mother-in-law couldn't stand any longer, so she separated the big family to three. The woman Tián thought the family separation wasn't fair, so their relationship was even getting worse.

It was the Yáo Tíngchūn's birthday, his mother let her younger son Tíngméi prepare a family feast, and invited Tíngchūn to celebrate his birthday, but woman Tián refused to go. Yao Tíngchūn came back drunden, and praised his sister-in-law Yáng Sūzhēn better behavior, who knows all the rules of propriety. Isn't it foolish to praising another woman in front of his own wife? Of course, this made his wife very angry, and they had a big row. At the time she secretly laid out a deadly trap to kill her brother-in-law, in order to revenge and possess all the family property.

The next day, the woman Tián pretended to feel sorry for her bad behaviour and wanted to make an apology. She invited her brother-in-law Tíngméi to have a drink, and poisoned him to death.

Because Tíngméi's widow Yáng Sùzhēn no longer had a husband, her older brother Yāng Chūn came to take her back to her father's house. However in fact Older Brother Yáng Chūn had conspired with the murderous Woman Tián, and had arranged to sell Yáng Sùzhēn as a wife to a cloth merchant named was Yáng Chūn. On the road she was therefore forcibly given over to Yáng Chūn to be his wife.

Yáng Sùzhēn was very unwilling and fought and quarreled with Yáng Chūn. Just then along came the Graduate Máo Péng, passing by on an inspecting tour on behalf of His Majesty, the Emperor, under the disguise of a fortune-teller. He asked why they were carrying on so. When Yáng Sùzhēn told of how her husband had been murdered and she had been sold, Yáng Chūn was moved to great sorrow and abandoned his plans to marry her. Instead they vowed that they would become sworn siblings. The GraduateMáo was very sympathized for Yang's ordeal and therefore wrote a complaint letter for her.

The two sworn siblings and the Graduate Máo travelled together to report the outrage at the local Yamen, where the magistrate was none other than Graduate Liú, who, however, was out making merry and was unavailable for ordinary business. So, they went to the Yamen at Xìnyáng city, which was at the next higher bureaucratic level.

When the two sworn siblings arrived at Xìnyáng City, they were set upon by a criminal gang, and became separated. Yang was rescued by a nearby inn-keeper Sòng Shìjié, who had once worked at the Xìnyáng Yamen. When Innkeeper Sòng heard her story, he was very sorry for her, and took her as an adopted daughter. She still had the letter that Graduate Máo had written for her, and Innkeeper Sòng helped her get it to the Yamen, where the magistrate was none other than the Graduate Gù, who immediately issued warrants for the arrest of Woman Tián and Yáng Qīng.

The Graduate Tián hasn't yet gone to report his post in Jangxi Province and temporarily remained at home. His older sister was arrested and been taken away, then his mother asked him to write a letter to Graduate Gù to get her daughter released. Graduate Tián was reluctant to do so, but could stand his mother's entreat with many tears, he wrote a letter along with 300 taels of silver as well to be carried by a trusted messenger to Graduate Gù in Xìnyáng City. When the messenger arrived in Xìnyáng, he put up at Sòng's inn. Something about him made Sòng suspicious, and in the night Sòng made a small investigation and discovered, read, and copied the secret letter. He knew that if the letter and the money reached Graduate Gù, then his adopted daughter's case would be lost.

When Gù received the letter (and the money), he immediately released Woman Tián, and he had Yáng Sùzhēn beaten and imprisoned for making a false accusation. Just for good measure, Innkeeper Sòng was also given 40 strokes for helping her.

Some time later, an Imperial Inspector chanced to come through Xìnyáng, and Sòng bumped accidently  into the cloth merchant Yáng Chūn, who was separated with his sworn sibling Yáng Sùzhēn, they together managed to get a complaint to the Inspector, tell him of the murder by Woman Tián, and how Woman Tián and Yáng Qīng had sold Yáng Sùzhēn, and how the Graduate Tián had bribed Graduate Gù. And Sòng provided a copy of the letter he had copied.

The Imperial Inspector was none other than Received Scholar Máo, who had originally met Sùzhèn and had drafted her original complaint. He took on the case, had Woman Tián and Yāng Qīng punished, and, with great sadness, brought about the dismissal of the corrupt Graduates, his own one-time friends Tián, Liú, and Gù.

(This story is from a Chinese Opera 四进士 Sì Jìnshì, or Four Metropolitan Graduates. Part of the plots was adopted from David K. Jordan's translation (without asking for permision, ^_^

The picture was screen printed from a comic book, edited by  小戈, and illustrated by 张锡武, published in 1960). 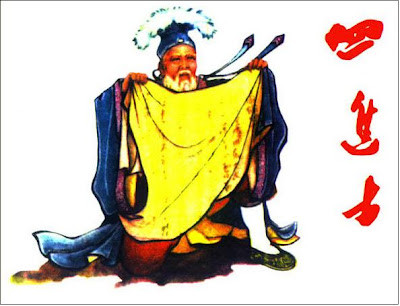