April 29, 2010
One upon a time, there was a frog who lived in a dilapidated well. He said to his friend the turtle of the Eastern Sea, "How I enjoy myself? I leap upon the parapet of this well. I enter, and having by means of the projections formed by the fragments of the broken tiles of the lining proceeded to the water, I draw my legs together, keep my chin up, and strike out. When I have got to the mud, I dive till my feet are lost in it. Then turning round, I see that of the shrimps, crabs, and tadpoles there is not one that can do like me. Moreover, when one has entire command of all the water in the gully, and hesitates to go forward, it is the greatest pleasure to enjoy one's self here in this dilapidated well;--why do not you, Master, often come and enter, and see it for yourself? "

The turtle of the Eastern Sea was then proceeding to go forward, but before he had put in his left foot, he found his right knee caught and held fast. On this he hesitated, drew back, and told the frog all about the sea, saying, "A distance of a thousand lî is not sufficient to express its extent, nor would a line of eight thousand cubits be equal to sound its depth. In the time of Yü, for nine years out of ten the flooded land all drained into it, and its water was not sensibly increased; and in the time of Thang for seven years out of eight there was a drought, but the rocks on the shore saw no diminution of the water because of it. Thus it is that no change is produced in its waters by any cause operating for a short time or a long, and that they do not advance nor recede for any addition or subtraction, whether great or small; and this is the great pleasure afforded by the Eastern Sea."

When the frog of the dilapidated well heard this, he was amazed and terror-struck, and lost himself in surprise. 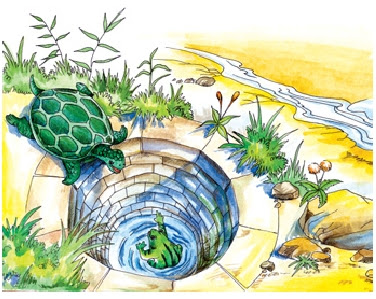