Han Dan Walks was first mentioned in Chuang Tzu, a story about a boy from Shouling (Wade-Giles romanization Shâu-ling, see below) who traveled to Handan to learn the Handan Walk. Before he manages to learn it, however, he had forgotten what he had learned to walk in his old city, and was marched back home on their hands and knees.

‘And have you not heard of the young learners of Shâu-ling 1, and how they did in Han-tan? Before they had acquired what they might have done in that capital, they had forgotten what they had learned to do in their old city, and were marched back to it on their hands and knees. ’

In the note to ‘Shâo-ling’, James Legge says ‘Of the incident referred to, I have not been able to learn anything.’ I wonder why he didn’t know about the Handan Walk. To many Chinese, the meaning of this idiom seems very obvious. But why the people of Shâu-ling went to Handan to learn its walking styles?

Handan (Wade-Giles romanization Han-tan) City, southern Hebei province, China. During the Warring State period ( from 386 to 228 BCE), Handan was the capital of the state of Zhao. It was a centre of trade and was famed for luxury and elegance.

In the translation of James Legge, he use plural ‘the young learners’, ‘they’ and ‘were marched back’, that means it’s a group of young learner instead of one went to Handan to it walking styles.

Now the people of Handan are proud of this awkward young learner, and set up a statue for him at the cross-road in the city centre, as tourist attractions. 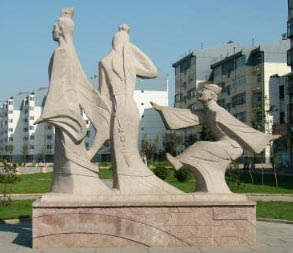