April 26, 2010
The time of the autumnal floods was come, and the hundred streams were all discharging themselves into the Yellow River. Its current was greatly swollen, so that across its channel from bank to bank one could not distinguish an ox from a horse.

On this the Spirit-earl of the Yellow River laughed with delight, thinking that all the beauty of the world was to be found in his charge. Along the course of the river he walked east till he came to the North Sea, over which he looked, with his face to the east, without being able to see where its waters began.

Then he began to turn his face round, looked across the expanse, as if he were confronting the North Sea Spirit Zo, and said with a sigh, 'What the vulgar saying expresses about him who has learned a hundred points (of the Tâo), and thinks that there is no one equal to himself, was surely spoken of me. And moreover, I have heard parties making little of the knowledge of Confucius and the righteousness of Po-î, and at first I did not believe them. Now I behold the all-but-boundless extent of your realms. If I had not come to your gate, I should have been in danger of continuing in my ignorance, and been laughed at for long in the schools of our great System.' 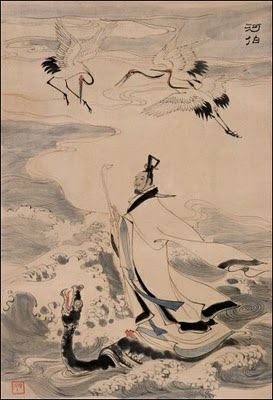