The first drumbeat excites the spirit 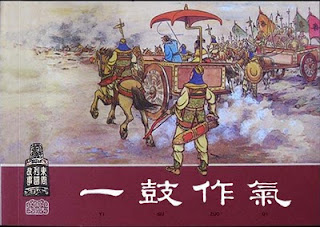 Victory depends on the loyalty of the troops and on the prudent strategy of commanders.

In his tenth year, in spring, the army of Qi invaded the state of Lu, and the duke of Lu was about to fight, when one Cao Gui requested to be introduced to him. One of Gui's fellow villagers said to him, "The flesh-eaters are planning for the occasion. What have you to do to intermeddle?" He replied, "The flesh-eaters are poor creatures and cannot form any far-reaching plans."

So he entered and was introduced. He asked the duke what encouragement he had to fight. The duke said, "Clothes and food minister to my repose, but I do not dare to monopolize them. I make it a point to share them with others." "That," replied Gui, "is but small kindness and does not reach to all. The people will not follow you for that." The duke said, "In the victims, the gems, and the silks, used in sacrifice, I do not dare to go beyond the appointed rules. I make it a point to be sincere." "That is but small sincerity; it is not perfect. The spirits will not bless you for that." The duke said again, "In all matters of legal process, whether small or great, although I may not be able to search them out thoroughly, I make it a point to decide according to the real circumstances." "That," answered Gui, "bespeaks a loyal-heartedness. You may venture one battle on that. When you fight, I beg to be allowed to attend you." The duke took him with him in his chariot.

The battle was fought in Chang Shao (长勺之战). The duke was about to order the drums to beat an advance, when Gui said, "Not yet." And after the men of Qi had advanced three times with their drums beating, he said, "Now is the time." The army of Qi received a severe defeat, but when the duke was about to dash after them, Gui again said, "Not yet." He then got down and examined the tracks left by their chariot wheels, remounted, got on the front-bar, and looked after the flying enemy. After this he said, "Pursue," which the duke did.

When the victory had been secured, the duke asked Gui the reasons of what he had done. "In fighting," was the reply, "all depends on the courageous spirit. When the drums first beat, that excites the spirit. A second advance occasions a diminution of the spirit, and with a third, it is exhausted. With our spirit at the highest pitch, we fell on them with their spirit exhausted, and so we conquered them. But it is difficult to fathom a great state. I was afraid there might be an ambush. I looked therefore at the traces of their wheels and found them all confused; I looked after their flags, and they were drooping. Then I gave the order to pursue them."