THE COUNTRY OF GENTLEMEN 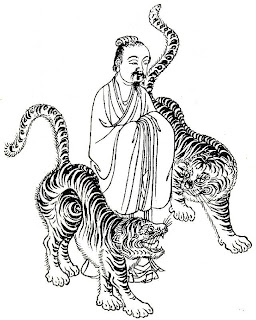 More than a thousand years ago there lived an Empress of China, who was a very bold and obstinate woman. She thought she was powerful enough to do anything. One day, she even gave orders that every kind of flower throughout the country was to be out in full bloom on a certain day. Being a woman herself, she thought that women would govern the empire much better than men ; so she actually had examinations for women and gave them all the important posts. This made a great many men extremely angry ; especially a young man named Tang, who was very clever and had taken many prizes. He said he couldn't live in such a country any more ; and sailed away with an uncle of his and another friend, on a long voyage to distant parts of the world.

They visited many extraordinary nations ; in one of which, the people all had heads of dogs ; in another, they flew about like birds ; in another, they had enormously long arms with which they reached down into the water to catch fish. Then there was the country of tall men, where everybody was about twenty feet in height ; the country of dwarfs where the people were only one foot in height, and their funny little children were not more than four inches. In another place, the people all had large holes in the middle of their bodies ; and rich persons were carried about by servants who pushed long sticks through the holes.

After a time, they came to a land which they were told was the Country of Gentlemen. They went ashore, and walked up to the capital. There they found the people buying and selling, and strange to say they were all talking the Chinese language. They also noticed that everybody was very polite, and the foot-passengers in the streets were very careful to step aside and make room for one another. In the market-place they saw a man who was buying things at a shop. Holding the things in his hand, the man was saying to the shopkeeper, " My dear sir, I really cannot take these excellent goods at the absurdly low price you are asking. If you will oblige me by doubling the amount, I shall do myself the honour ot buying them; otherwise I shall know for certain that you do not wish to do business with me to-day." The shopkeeper replied, " Excuse me, sir, I am already very much ashamed at having asked you so much for these goods; they really are not worth more than half. If you insist upon paying such a high price, I must really beg you, with all possible respect, to go and buy in some other shop." At this, the man who wanted to buy got rather angry, and said that trade could not be carried on at all if all the profit was on one side and all the loss on the other, adding that the shopkeeper was not going to catch him in a trap like that. After a lot more talk, he put down the full price on the counter, but only took half the things. Of course the shopkeeper would not agree to this, and they would have gone on arguing for ever had not two old gentlemen who happened to be passing stepped aside and arranged the matter for them by deciding that the purchaser was to pay the full price but only to receive three- quarters of the goods. Tang heard this sort of thing going on at every shop he passed. It was always the buyer who wanted to give as much as possible, and the seller to take as little. In one case a shopkeeper called after a customer who was hurrying away with the goods he had bought and said, " Sir, sir, you have paid me too much, you have paid me too much." "Pray don't mention it," replied the customer, " but oblige me by keeping the money for another day when I come again to buy some more of your excellent goods." " No, no," answered the shopkeeper; "you don't catch old birds with chaff, that trick was played upon me last year by a gentleman who left some money with me, and to this day I have never set eyes upon him again though I have tried all I can to find out where he lives."

But soon they had to say good-bye to this wonderful country and started once more upon their voyage. They next came to a very strange land where the people did not walk, but moved about upon small clouds of different colours, about half a foot from the ground. Meeting with an old priest, who seemed rather a queer man, Tang asked him to be kind enough to explain the meaning of the little clouds upon which the people rode. "Ah sir," said the priest, " these clouds show what sort of a heart is inside the persons who are riding on them. People can't choose their own colours ; clouds striped like a rainbow are the best ; yellow are the second best, and black are the worst of all." Thanking the old man, they passed on and among those who were riding on clouds of green, red, blue and other colours, they saw a dirty beggar riding on a striped cloud. They were much astonished at this because the old priest had told them that the striped cloud was the best. " I see why that was," said Tang, " the old rascal had a striped cloud himself." Just then the people in the street began to fall back, leaving a passage in the middle ; and by and by they saw a very grand officer pass along in great state with a long procession of servants carrying red umbrellas, gongs, and other things. They tried to see what colour his cloud was, but to their disappointment it was covered up with a curtain of red silk. "Oho!" said Tang, " this gentleman has evidently got such a bad colour for his cloud that he is ashamed to let it be seen. I wish we had clouds like these in our country so that we could tell good people from bad by just looking at them. I don't think there would be so many wicked men about then."

Soon after this, news reached them that the Empress who had been so troublesome in their own country had been obliged to give up the throne. So they went no further on their travels but turned their ship round towards home, where their families were very glad to see them again. 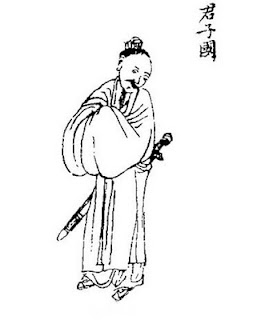