May 13, 2011
Chang Liang, Marquis of Liu, dealt a blow at Ch'in Shih Huang Ti with a club, but by mistake hit one of the chariots of his retinue. Ch'in Shih Huang Ti, infuriated, gave orders to search for Chang Liang everywhere, but he changed his name and concealed himself in Hsia-pei, where he had always leisure to stroll about at pleasure. Up the river Sse, there was an old man in coarse clothes, who came to Chang Liang's place. He had just lost one shoe down the river, therefore he said to Chang Liang, " Go down, and fetch me my shoe, my boy." — Chang Liang grew angry, and was going to give him a beating, but noticing, how strong the old man looked, be repressed bis feelings, and went down to fetch the shoe, which he offered him on his knees. The old man slipped it on his foot, and went away laughing. Chang Liang felt greatly excited.

When the old man had gone to about a Li's distance, he returned. "You can be taught, my boy," be said, "Five days hence, at sunrise, meet me here." Chang Liang bewildered, knelt down and assented. After five days, at sunrise Chang Liang went, but the old gentleman had already arrived before him. " Why must you come later, when you have an appointment with an old man?," asked he angrily. " Five days after my departure, very early, we will meet again." — After five days Chang Liang went again at cockcrow, but again the old man had arrived before, and repeated his angry question, wherefore he had arrived later. "Five days after I have left," said he, "come again very early." — On the fifth day Chang Liang went before midnight, and after a short while the old gentleman arrived. " So you are right," said he, very pleased.

He then produced a pamphlet, which he gave him saying, "Read it, and you will become preceptor to an emperor. Alter thirteen years you will see me. A yellow stone at the foot of Mount Ku- ch'êng in Ch'i-pei 1 that is I." Whereupon he went away, saying nothing further, and was not seen again. At dawn Chang Liang looked at the book. It was " T'ai Kung's Strategy." Chang Liang amazed, studied it very thoroughly.

What was this? An augury of Kao Tsu's elevation by Chang Liang's assistance. Chang Liang lived ten years at Hsia-pei as a knight and a hero. When Ch'ên She and his confederates rose in revolt, and the Governor of P'ei visited Hsia-pei, Chang Liang joined them. Subsequently, he was made a general and ennobled with the title Marquis of Liu. Thirteen years later, when with Kao Tsu he crossed the Ch'i-pei territory, he found a yellow stone at the foot of Mount Ku-ch'êng. He took it, stored it away, and worshipped it, and, when he died, it was buried with him. 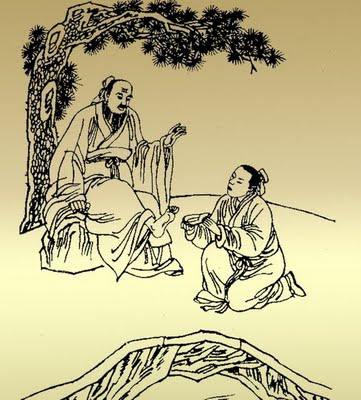