How Tzu Lu met a recluse

June 03, 2011
Once when Tzu Lu was following the Master on a journey he happened to fall behind. Meeting an old man carrying a basket on his staff, Tzu Lu asked him, "Have you seen my Master, sir?" "You," said the old man, "whose four limbs know not toil, and who cannot distinguish the five grains, who may your Master be? " With that he planted his staff in the ground and commenced weeding.

Tzu Lu joined his hands together in salutation and stood waiting.

The old man kept Tzu Lu for the night, killed a fowl, prepared millet, and gave him to eat, introducing also his two sons.

Next morning Tzu Lu went his way and reported his adventure; "He is a recluse," said the Master, and sent Tzu Lu back again to see him, but on his arrival the old man had gone.

Whereupon Tzu Lu said to the sons: "It is not right to refuse to serve one's country. If the regulations between old and young in family life may not be set aside, how is it that he sets aside the duty that exists between a Prince and his ministers? In his desire to maintain his own personal purity, he subverts one of the main principles of society. A wise man in what ever office he occupies, fulfils its proper duties, even though he is well aware that right principles have ceased to make progress." 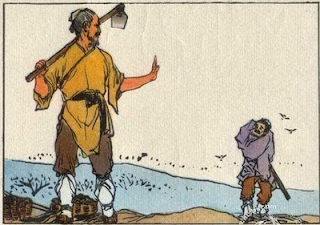