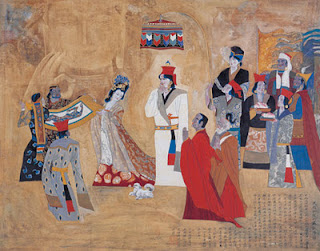 In the seventh Century, Ki tson Long tsang was a very powerful King of the Tou fan. He have had webbed hands and feet, a deformed face and odd skin. He took the throne when he was only thirteen after his father was poisoned by the rebells. The book The Holder of the White Lotus says that he was the reincarnation of the Avalokiteshvara Buddha, of whom the Dalai Lama are similarly believed to be the reincarnation.

Ki tson possessed a vast tract of land. He had even several little tributary kings, to whom he sent patents and golden seals. He was desirous to contract an alliance with China, in the Time of the Emperor Tai tsong of the Dynasty of Tang, one of the greatest Princes that ever enjoyed this monarchy. He sent him a celebrated embassy, with huge presents which include a golden Goose, seven feet high. Tai tsong was pleased with this politeness, and the ambassadors were received and dismissed with the greatest marks of honour and distinction.

Ki tson upon this Encouragement sent a second embassy, to demand a Princess of the Imperial Family for himself. The Emperor's Council thought this a very bold proposition, and rejected it with scorn, without deigning to take it into consideration.

Then Ki Tson came at the Head of 200,000 men to demand the Princess, and having defeated several tributary princes of China who opposed his passage, he penetrated to the frontiers of the Province of Chensi, where the Emperor then kept his Court. The Imperial Council depended on the resistance of there Princes, because a numerous army could pass no other Way. After these first actions of his victorious army, Long tsang sent one of his officers with a proud and haughty letter to the Emperor of Tang; he demanded that the Princess should be immediately given him, with a certain quantity of gold, silver and silks, which was due, as he said, to a spouse of an Imperial Princess, who came to receive her in person with so much pomp and magnificence. The Emperor being offended at this demand, sent orders immediately to assemble the troops on the frontiers; and to give them time for it, he amused the envoy with great hopes, by treating and giving him every day new entertainments. But as soon as he heard that the army was ready to march, he shamefully dismissed the envoy, without giving him an answer to the letter of the King his Master.

The General set out at the same time, and immediately after he arrived at the army, he attacked the army of Long tsang, and gained the victory. The loss was not so great on the Prince's part, but that he found himself in a condition to give his enemy some uneasiness after he had rallied his men. Therefore as he promised to retire if the Princess was sent to him with an equipage suitable to her dignity, the Emperor's Council was of opinion that he should give his consent.

The Princess Wen Cheng was conducted in a pompous manner, and after the ceremonies of the wedding Long tsang retired, and became a faithful ally. He was even of service to the Empire on several occasions; the principal was, when the General Alena usurped a tributary Kingdom of China. Long tsang assisted the Emperor's general with all his forces, he fought himself in person, and had a great share in the victory by killing the rebel Alena.