A Woman Who Never Smiled

November 14, 2011
There was once a woman who never smiled. Her name was Bao Si and she was a concubine to King You of the Western Zhou dynasty, which flourished in China after 1000 BCE. The King neglected the affairs of government for the sake of the company of this beautiful but melancholy  concubine. He wanted so much to see her smile that he scoured the kingdom for entertainers and performing animals; not a flicker of amusement crossed her face.

One day, Bao Si was watching her maids doing needle-works, one of the maids accidentally torn apart a piece of silk, King You noticed a twitch of her lips and a flicker of smile on her face, and asked if she like the sound of tearing silks. Bao Si said she loved the sound of rent silk. Then the King immediately ordered that many thousands of fine pieces of silk were torn to shreds to gratify her whim. But this couldn't make laugh either. 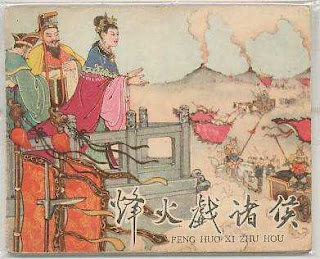 The king offered a thousand ounces of gold to any one who would make her laugh; whereupon his chief minister suggested that the beacon-fires of wolves' dung should be lighted to summon the feudal nobles with their armies and other inhabitants to arms, as though the royal house were in danger.

The King ordered to try this trick at once. The beacon-fire was ignited, a signal of emergency. Troops poured into the capital in battle array, only to be stopped short and told that the fire had been lit by accident. At this Bao Si smiled; in fact, she began to laugh.  The Chief Minister was rewarded thousand oounces of gold.

Keen to repeat his success, the king had bonfires lit over and over again, for in the hurry-skurry that ensued the impassive girl positively laughed outright each time.

Later on, when a real attack was made upon the capital by barbarian hordes, and the beacon-fires were again lighted, this time in stern reality, there was no response from the insulted nobles. The king was killed, and his concubine strangled herself.