How a Chinese General fight back the invasion of Tibetan 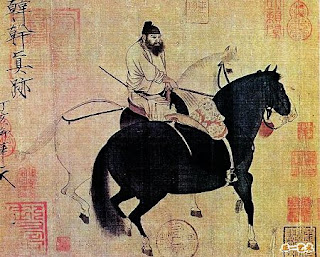 In 963, As soon as the Tibetan heard of the death of the Tang Emperor Su Zong, they began their march with a formidable army, and advanced with incredible expedition; the irruption was not perceived, till they arrived on the frontiers of the empire. The governors of the Great Pass Da Zhen, of Lan zhou, and of all the countries in the District to the west of Yellow River were surprised, and forced to surrender; and the news arrived at court only by some fugitives. At first the minister could hardly believe the report, yet as it was prudent to take some precautions, he ordered the most skillful General Officer Guo Ziyi who was then at court, to set out at the head of 3000 horse to learn the truth. General Guo was scarcely arrived at Xian yang, a Town near the Court, when he received information that the enemy's army, consisting of 300,000 men, was expected there that day; he immediately dispatched a courier to the minister, praying him to send succours, without which it was impossible for him to make head against the Tibetan, who were ready to fall upon the Capital Chang-an where the Emperor resided.

The minister took no notice of this message; in the mean time, the generals of the enemy's army, who knew the country, were no sooner arrived at Xian yang, but they detached a considerable body of troops to get possession of a bridge which was upon the river. Next day the rest of the army arrive there in good order.

The Emperor, who till then had not been acquainted with the danger, was so surprised with this sudden news, that he abandoned his palace and fled. The Grandees of the Court, the Officers, and people all followed his example.

So that the victorious army entered the palaces of the Emperors and Princes without resistance, where they found immense riches, which they plundered, after which they set them on fire, and at the same time fired several parts of the town.

Guo ziyi was retired with his 3000 horsemen to join the troops, who in the first surprise fled out of Chang-an, and by the means of this union saw himself soon at the head of 40,000 men.

But Guo's army was small and not in good shape by comparison with the great army of Tibet, in order to supply by policy what he wanted in strength, he had recourse to the following stratagem: he ordered a detachment of horse, commanded by one of his best officers, to go and encamp upon the neighbouring hills, to range them in one line, so make a terrible noise of drums, and every night to make great fires in different places within view of the enemy.

This artifice succeeded: The Tibetan were afraid of being surrounded and overpowered by the united forces of the whole Empire, commanded, as they well knew, by a General of great skill and bravery; therefore they turned to the west, and blocked up the town Fong Jiang.

Malin, who commanded in this district, came to the relief of the place, and having forced a body of the enemies army, and killed above a thousand men, he threw himself into the town. As soon as he was entered, he set open all the gates, to let the enemy see he did not fear them. This extraordinary conduct astonished the Tibetan, and confirmed their former suspicions, and they no longer doubted but, that there was some ambuscade to surprise them. On the other hand, said they, this Governor seems not to value his life, it would cost us too dear to make ourselves masters of the town, and as we are weakened already by the fatigues we have undergone, could we stand the shock of an army, perhaps more numerous than our own, and composed of fresh troops? Upon this they resolved to retire, contented with the booty they had gained; and by their retreat they gave the Chinese time to repair the Capital of Chan-an, to which the Emperor returned some months after he had fled from it in such a shameful manner.