The castle of Zeland

Though the beautiful Island Formosa (or Tai wan) lies at no great Distance either from Japan or China, it was a long time unknown to these two neighbours.

At the End of the Year of 1620, Japanese squadron ships came upon the coast of Formosa, and they settled a colony there.

About the same time a Dutch vessel, in her voyage from Japan, or in her return thither, was forced by a storm into Formosa, where they found the Japanese in no condition of opposing them. The country appearing beautiful to the Hollanders; and advantageous for their commerce, they pretended want of refreshment, and things necessary for refitting their vessel, which was damaged by the storm. Some of them made an excursion into the country, and having examined it, returned on board.

The Hollanders beseeched the Japanese to permit them to build an habitation upon the brink of the Island, at one of the entrances into the harbour, which might be serviceable to them with respect to their commerce to Japan; the Japanese at first rejected the proposal, but the Hollanders pressed the matter so that the Japanese at last consented, when they assured them they required no more ground than what could be encompassed with an Ox's hide.

The Hollanders then took an Ox's hide and cut it into small thongs, which they tied end to end, and therewith measured the ground they desired. The Japanese were at first a little vexed at this trick, but after some reflection, they laughed at it, and were pacified, and suffered the Hollanders to do as they pleased with the piece of ground. 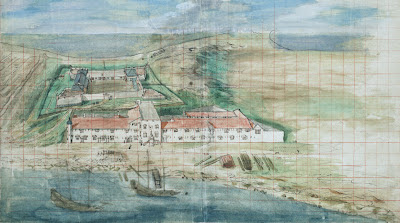 (The General History of China, J. B. Du Halde, photo from Wikipedia)