When the tree falls, the monkeys scatter.

This proverb originates from the story of Qin Hui, who was regarded till today as the most treacherous court minister of the Song dynasty.

Qin Hui was born with a peculiarity: his feet measured one foot four inches from heel to toe. he was therefore nicknamed the Long-Foot Scholar when he was a student in the Royal Academy.

Qin Hui had been teacher in a private school, he was very unsatisfied by his humble and mean position, and wrote a poem, one couplet of it was: If I had three hundred Acres of irrigated lands, I wouldn't have to be the Monkey king. Here the monkeys were referred to mischievous boys in the private school, he himself was the king of those monkeys.

Later he passed the imperial examinations and rose quickly to the post of Prime Minister. By the time, the Song dynasty was under continuous attack by the northern tribe Jurchen [Jin]. Qin Hui initiated Peace negotiation with Jurchens, and made the Southern Song dynasty cede territory and subjugate itself to them.

In the meantime, Yue Fei was putting the Jurchens forces to rout in battle after battle. But, in the course of a single day, Qin Hui issued twelve golden plaques ordering Yue Fei to withdraw his forces from the front, much to the indignation of all the soldiers. Yue Fei duly returned, only to be demoted to the position of supervisor of Longevity Temple, then executed under “groundless charges”.

When Qin hui was in power, he had many followers who sought favours at his gate, but after died, all of them fell one after another. One of his followers were called Cao Yong, who was demoted and exiled to a remote place. Cao's brother-in-law, once oppressed by him, wrote a satiric prose, entitled “When the tree falls, the monkey scatter.” In this essay, he resembled Qin Hui as a big tree and Cao Yong and his like as monkeys that rode roughshod over others under the protection of the tree. Now that the tree had fallen, the monkeys cannot but flee helter-skelter. 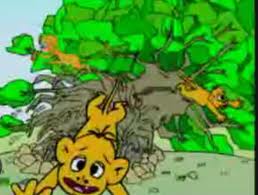 In the Temple of General Yue in Hangzhou, the capital city of Zhejiang Province, one of the four bronze figures was Qin Hui, which was on bended knees with his hands tied in the back and heads lowered. Visitors to the temple spit on the bronze figure and slapped him in the face till today. 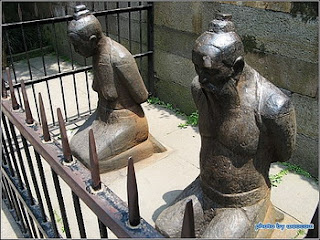