Emperor Wu of Han and the Immortal Liquor

April 26, 2012
Emperor Wu ti of Han dynasty was esteemed one of the greatest Emperor of China, but he had the Weakness to give ear to Impostors, who promised him an Elixir which should render him immortal.

One Day one of these Chemists brought him a Cup full of this immortal Liquor, and desired him to drink it for an Experiment ; one of his Ministers, who was advising him not to hearken to such Cheats, took the Cup and drank it himself ; the Emperor being very angry that his Minister had deprived him of Immortality, revolved to punish him with Death for it ; to which the Minister replyed with a Smile :--

This Answer soften'd the Emperor, who praised the Wisdom of his Minister, but was not thoroughly cured of that Weakness. (Du Halde) 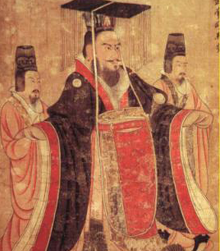 Another similar version of the story:

The Elixir of Death