Wu Ding Discovered his Prime Minister in his dream 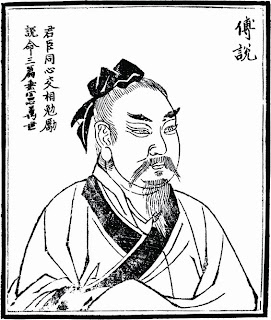 VOU TING (or Wu Ding) was yet young when he ascended the Throne in 1317 BC. He entrusted the Government of Empire with his Prime Minister, during his three Years Mourning, and shut himself up in a House near his Fathers Tomb, in order to lament his Death, and to beg of Heaven to grant him the proper Virtues to qualify him for the high Station to which it had appointed him.

The Time of his Mourning being expired, he returned to his Palace, and saw, in a Dream, a Man presented him by Heaven to be his Prime Minister ; he beheld him with Attention, and the Features of his Face were so strongly imprinted on his Fancy that he drew an exact Portrait of him When he awoke.

Upon this he assembled his Ministers, and having related to them his Dream, and Shewed the Picture to them, he sent several of them to seek for the Person whose Picture they had seen.

They found him in a Village, called Fou Ya, in company with a great many other Artificers ; his Name was Fou Yue, a Mason by Trade. The King's officers discovered that Fou Ye had great fame in that area, for he invented a new method to build earth wall, which was called Board and Ram, a technology to  build walls by ramming soil inside a wooden board frame, when the soil dried and hardened, the frames were removed. This was the great improvement in construction technology. 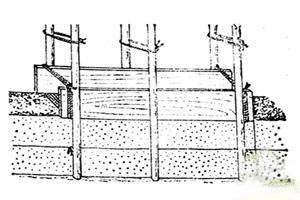 Fou Yue was immediately carried tor Court, where a great many Questions relating to Politicks and Government were proposed to him, to which he gave very proper and just Answers, with a great deal of Eloquence, to the Admiration of every one, so that the Emperor, after addressing him in the warmest Terms, immediately made him his First Minister.

Fou Yue prostrated himself before the Emperor, according to Custom, whom he found always very compliant with his Inflictions, the Particulars of which I shall publish in the Chu king ; the Emperor followed these Instructions regularly, and by that means became a Pattern for the best of Princes, and his Reputation extending to the most distant Nations induced them to come and pay Homage to him.

This Prince died in the fifty-second Year of the Cycle, which was the year before Christ 1265, and was succeeded by his Son, called Tsou keng.