Ma Liang and his Magic Paintbrush

Once upon a time, in China, there lived a poor boy called Ma Liang. He had to work hard every day, gathering firewood, washing pots, scrubbing floors, etc. He loved to draw, but he was too poor to buy a paintbrush.

"I can draw on the ground with stick!" he said to himself, "But I could paint picture for poor people if I have a paintbrush."

Suddenly an old man appeared. He held out a paint brush, and gave it to Ma Liang. "Now you can paint pictures for poo people," he said.

The old man disappeared, leaving the paintbrush in Ma Liang's hand. Ma Liang started to paint immediately. He painted a butterfly, but the butterfly came to life and flew away! this was a magic paintbrush!

Soon everyone in the village heard about Ma Liang's paintbrush. Poor people began to ask him to paint things they needed.

"I am so hungry! Please paint me some rice." One poor man asked.

Ma Liang painted rice for him.

"Please paint me some fishes." asked another.

"Here you go. Be careful, it's very slippery!"

"I am cold! Please paint me a coat." asked another, he was shaking in the freezing wind.

"Here, this will keep you warm." Ma Liang painted him the warmest coat.

Soon the story of the boy with the magic paintbrush spread across China to the royal palace. Even the emperor knew about Ma Liang.

The emperor was a very greedy man. He said to Ma Liang: "Draw me a tree covered with gold coins!"

Ma Liang refused said: "No, I only paint for poor people!"

The emperor was furious! "Lock him up!" The emperor ordered his guards to threw Ma Liang into prison.

Ma Liang was hungry, cold, and lonely in the prison. Suddenly the old man who gave Ma Liang the magic paint brush appeared. He said, "Ma Liang, did you forget your paintbrush? It can save your life too!"

This reminded Ma Liang. He started to draw. He painted an Island, on the island, there were a lot of trees covered gold coins. And then he draw a huge sail boat mooring at the port waiting for sail.

The next morning, when the emperor came to the prison, and saw the Island.  He immediately order to sail to the Island with all his ministers and grandees.

When the emperor was on board, and ordered Ma Liang to draw winds to send the sail. Ma Liang started to draw, but he drew hurricane instead wind, and thick black clouds and heavy rains, too. The typhoon blew the boat far away in the sea, and the emperor's ship wrecked in thunderstorm, and they never came back.

Ma Liang waked back to his village, and he told everyone what happened. The he went on painting things for poor people. All villagers lived happily ever after. 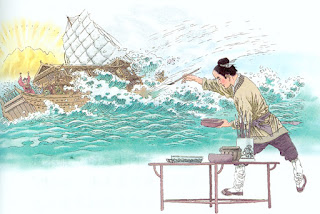