A legend of the wife of Chwang-tsz (Zhuang zi, 庄子), the Taoist sage. 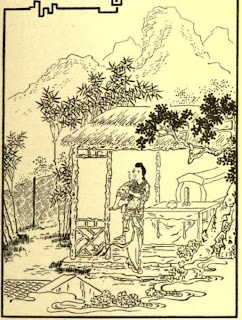 Chwang-tsz (B.C. 330) was out walking by a certain hill, where he saw a woman fanning the grave. He inquired the reason of the strange procedure. She answered that her husband, who was buried there, had ordered her not to quit his grave until the clay was dry. As she wished to go home as soon as possible, she was fanning it to accelerate the tardy process of drying. The philosopher fanned it dry at once with his magical fan, returned home, and related the story to his wife, who vehemently condemned the widow's scanty respect for the dead.

After a while, Chwang-tsz was taken ill and died. His widow had promised that she would never marry again, but she soon became enamoured of a young man who introduced himself as one of the deceased philosopher's pupils. They were soon betrothed, but he fell ill with cholic, and in reply to her solicitous inquiries, said that there was only one efficacious remedy for him, namely, the brains of a newly-deceased man. She went, therefore, to her husband's coffin, and opened it with a hatchet, when, to her great alarm, he rose up alive and well. The " disciple " had been the product of his magical powers. She fled and hung herself for shame.

On which the philosopher began drumming upon a basin, and gave vent to his feelings by singing a song beginning :

From open flowers the petals fall.

She dead, I must her Bury ;

I dead, she sure would marry."