The fox arrogating the tiger's power to terrify

September 13, 2012
A she fox was overtaken by a tiger, which was about to devour her.

The fox remonstrated with the tiger, and claimed that she possessed a superiority over other animals, all of whom she declared stood in awe of her. In proof of this, she invited the tiger to accompany her, and witness her power.

The tiger consented, and quietly followed. Every beast fled at their approach, and the tiger dare not attack the fox, not considering that the terror was caused by his own appearance.

Hence the saying, 'the fox arrogating the tiger's power to terrify.' 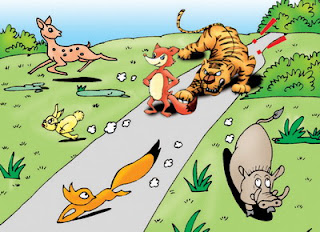