It says that a far away land in the south beyongd sea, a kingdom called Perforated Chest Kindom. The people have holes in their chests, which render the use of the sedan chair unnecessary; the wealthier of them being transported from place to place by means of a bamboo passed through the said hole.

The Encyclopedia Bo Wu Zhi presents the origin of this kingdom. The Perforated Chest tribe is the descendant of two ministers of Fang Feng.

Yu the Great summoned all the gods to the great assembly on Mount Mao in Kuai-ji, one of them, the chieftain of Fang feng tribe hesitated and came too late. Yu the Great had him executed.

Later, when Yu traveled in a dragon carriage, and passed by Fang-feng’s territory. Two Fang-feng’s ministers wanted to revenge for their lord, so they shoot Yu with an arrow. Then the storm blew up and the dragons rose up and left. The two officers, terrified, stabbed themselves with daggers in the heart and died.

Yu the Great grieved over them, and he revived them with magic herbs, and they became the Perforated Chest. 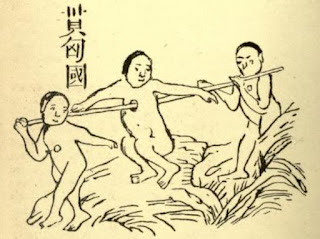