Kung-Ming offered the empty city to his enemy 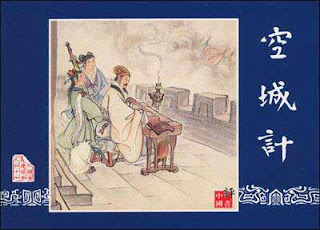 On one occasion Kung-ming had sent on a large army that he had collected to fight with the rival general Si-ma Yi who was nearly as able as himself, whilst he followed behind, hoping to reach it before the enemy came into contact with it. He was proceeding leisurely along, when he was suddenly disturbed by a rush of defeated soldiers who were flying in the utmost disorder as though pursued by a successful foe. He found to his dismay that these were his own men, who had been routed and dispersed by the opposing army; and so thoroughly had they been demoralized by their defeat that all the influence and prestige that he possessed had no power to stay their flight, or to induce them to gather round his standard and once more follow him to meet the enemy.

The panic indeed was so universal and the fear of the pursuing enemy so great, that he was deserted by every one excepting two of the most devoted of his followers, and with these he retreated to the city of Han-chung that lay some miles away in the rear. Entering into this, he ordered the city gates to be thrown wide open, whilst he and his two friends took up their position on the city wall with guitars in their hands, and there, as though they were celebrating a great victory, they sang songs and played the most lively airs on their instruments.

Before long the first ranks of the advancing foe appeared in the distance, and ere long the whole army, with banners flying and trumpets braying and with every sign of exultation, rapidly advanced in the direction of the city with the certainty of capturing it without a blow. As the troops drew near, what was their astonishment to find that the gates were flung wide open, whilst Kung-Ming, the redoubtable general, was seen playing the guitar on the walls of the town in full view of the whole army.

The general immediately ordered a halt of all the troops under his command, and rode forward with his staff to examine into this remarkable state of things. The city gates truly were thrown wide open, but not a soldier could be seen either there or upon the ramparts, neither was there any sign of defence whatsoever. All that could be seen was Kung-Ming sitting with a gay and festive air on one of the towers, twanging his guitar and singing one of the national songs of the time. As the general gazed in the utmost perplexity the notes of the music vibrated through the air, and the loud tones of Kung-Ming, heard above the highest strains, reached the listening soldiers as they stood to their arms.

There was something mysterious about these open gates, and the musical entertainment that could only have been prepared for the enemy. Kung-Ming had always been noted for the fertility of his resources, and now he had evidently thought out a deep-laid scheme to involve his enemies in utter ruin.

General Si-ma Yi was a man of consummate ability, but he recognized that in military tactics he was no match for the man that was singing so blithely on the walls above him. Fearful lest his army should be involved in some terrible disaster by the wily foe with whom he had to contend, he gave orders to retreat, and every man under his command felt that he was not safe until some miles had been placed between him and the famous general who had been entertaining them in so strange and unlooked-for a manner.

Thus by this famous ruse Kung-Ming saved his town for Liu Bei, and at the same time gave him an opportunity of gathering together his forces for a new campaign with his enemies. The story has come down the ages, and to-day is perpetuated in the language in the well-known proverb, “Kung-Ming offered the empty city to his enemy,” which is often applied to clinch an argument about something that is happening in daily life.