Tseng Shen (550-435BCE), courtesy name Tzu yü, was a Chinese philosopher, and a disciple of Confucius. He was the teacher of Tzu Ssu (483-402 BCE), the Grandson of Confucius. He is credited as the transmitter of the Great Learning, an important work that was incorporated in the Book of Rites.  He is also with having authored the Book of Fillial Piety.

Tseng Shen was a fillial son. When he was young, Tseng Shen was very poor, he had to cut wood for fuel from the mountain. Once when he was away on the hill, a visitor came to his home. His mother didn't not know how to treat the visitor, so she bit her finger. Tseng Shen suddenly felt pain in his heart. He immediately realized that his mother was calling! No later his action than his thought, and he quickly returned home, found that he had a visitor at home, and his mother was in distress.

Tseng Shen was honest and strictly keep his promise even to his child. One day, when Tseng Shen's wife was going to the market, their son cried and wanted to go with her. His wife tried to quiet her son by promising to kill the sucking pig when she came back home. Upon her return, Tseng Shen grabed a knife to kill the sucking pig. His wife tried to stop him, and explained that she didn't mean it, she just said so to keep the boy quite, but Tseng Shen said, "How can you decieve a child like that? Children learn from their parents. When you cheat the boy, you are teaching him to lie." 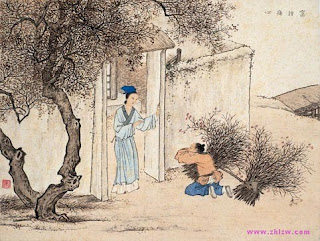